This website is dedicated to promote the enduring legacy of Henri Nouwen, one of the greatest spiritual writers of the last century. It is owned and managed by Wil Hernandez whose Ph.D. dissertation work focused upon the study of Nouwen's counterintuitive and countercultural brand of spirituality.
Click here to find out more about Wil Hernandez and his work.

The prodigal son story is an amazing image of how God patiently waits to be in communion with us.. Even if we leave home for a while, Love waits for our return. We may condemn ourselves, but we are not objectively being judged for our misguided decisions, nor is the One who loves us saying, “Away from me, I do not love you anymore.” No! That response is against the very nature of the eternal Lover that Jesus invites us to know. The God of Jesus is, ‘mercy within mercy, within mercy.”

– Henri Nouwen, “Home Tonight: Further Reflections on the Parable of the Prodigal Son” 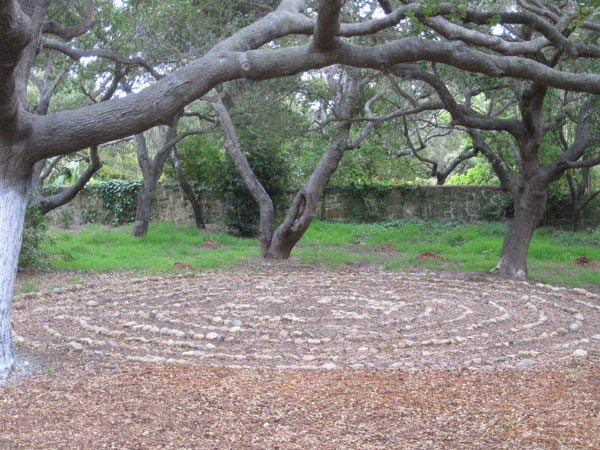 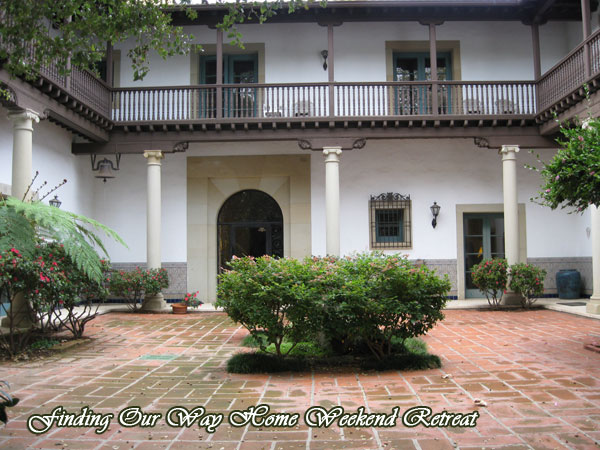 During the first weekend of November, nineteen of us gathered at the gorgeous Immaculate Heart Community Retreat Center for a Henri Nouwen retreat. The theme was “Finding Our Way Home” based out of Nouwen’s popular books “The Return of the Prodigal Son” and “Home Tonight.” We were favored by the visit of Sr. Sue Mosteller, CSJ of the Nouwen Legacy Trust from Toronto, Canada. Sue co-facilitated the weekend retreat with me and blessed all of us with her inspiring and challenging messages. The group, which was quite diverse in age, gender, ethnicity, and denominational affiliation (Catholic, Lutheran, Episcopalian, Baptist, Methodist, Evangelical, Presbyterian), bonded so well. Together, we interacted in small groups, participated in liturgical prayers, fellowshipped over meals, engaged in the practice of Lectio Divina as a community, and cried  with and for one another as we shared and listened to each other’s moving stories of our respective journey. Without a doubt, God worked in our midst as well as in and through all our lives as we opened ourselves up to the process of “finding our own way home” to God’s unconditional  love. We parted ways having been touched and blessed unmistakably by the loving presence of God! It was, in more ways than one, truly a meaningful weekend to remember!

The Mosaic That Shows Us the Face of God

A mosaic consists of thousands of little stones. Some are blue, some are green, some are yellow, some are gold. When we bring our faces close to the mosaic, we can admire the beauty of each stone. But as we step back from it, we can see that all these little stones reveal to us a beautiful picture, telling a story none of these stones can tell by itself. 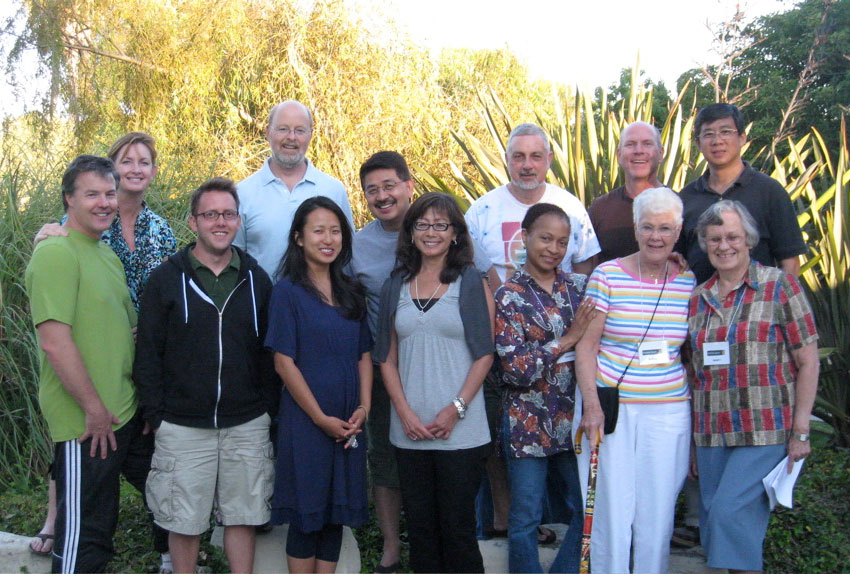 We had an experiential glimpse of the “mosaic” that Henri Nouwen speaks about as thirteen of us immersed ourselves for the past six months in community life via a series of three weekend retreats starting last mid-March. The composition of our group could not have been more diverse in a lot of ways. The age of the participants ranged from 26 to 83 years old with a mixture of Caucasians, African-American, Japanese-American, Taiwanese, Singaporean, and Filipino descent. Our small groups included young singles, single moms, a married couple, married men, a widow, among others, who are a blend of young and established professionals, retiree, graduate students, ministers, etc. coming from both evangelical and mainline protestant as well as Catholic backgrounds.

Together we learned from Henri Nouwen’s insightful guidance how to journey toward greater integration, weaving together the intertwining movements of the inward, outward, and the upward thrust of our spiritual life through the avenues of solitude, service of hospitality and communing prayer.

During our community time at our finale retreat last August 20-22, two shared commonalities stood out despite our glaring differences: the reality of our own brokenness and our identity as God’s beloved children. On our last evening, we got to gift each other with our own uniqueness as individuals, celebrating our unity amidst our diversity by openly sharing of our talents, our stories, our struggles, our varied gifts via music, art, dance, poetry, words of wisdom and encouragement. It was a especially moving time. Throughout our time together, we laughed, we cried, we struggled, etc., but most of all, we bonded well—reflecting “the mosaic that shows us the face of God.”

Learning from our experience this year, I have decided to modify the format and content of next year’s series of retreats (see details below). Do consider joining us for one or more (or the entire series) of weekend retreats revolving around a new theme: “A Life of Tension.” The retreats will highlight the ways in which Henri Nouwen befriended spiritual polarities in his own journey and how we can learn from his example. 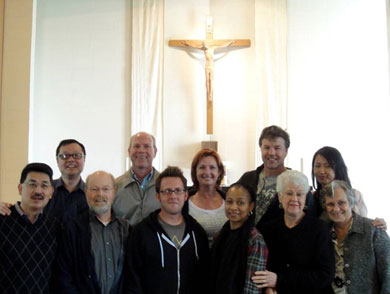 May 14-16, 2010 - Our first cohort had our second weekend retreat with three new additions to the community: Michael and Theresa Coon and Todd Blackham. We missed three people this time: Patti, Margreth, and Roy (who had a family emergency). We had great plenary and small group discussions and interactions on the theme "Journey Outward" based on Nouwen's book "Reaching Out" particularly on the subject of hospitality and community. Aside from each small group leading the various prayer liturgies, times of Centering Prayer and Lectio in Community helped bond the group tighter, not to mention the informal meal times we enjoyed together. One highlight for many was the "Wellness Time" - a group exercise led by Jovy Lam after a good hike and before we proceeded to our Community Evening Prayer on Saturday. We are eagerly looking forward to our "Journey Upward" on our next weekend retreat in August with the entire community hopefully in complete attendance this time around!

I had the privilege of facilitating a one-day retreat sponsored by the Guadalupe Center (Catholic Charities) at the Holy Spirit Retreat Center in Encino. The theme for the day was inspired by Henri Nouwen's concept of Solitude, Community, and Ministtry trilogy which we retitled "A Spirituality of Ministry: Communion, Community, Commission." The event was participated in by some 30 volunteers who were very eager and receptive. There was some good interaction among various small groups and excellent plenary discussion of the topic. I so enjoyed being with these bunch of God's servants ministering God's love to others. This was the very first volunteers retreat they ever conducted and it's such a blessing to be guiding them through the day which was highlighted by periods of meditation, personal reflection, group interaction, singing, and liturgical prayers. What a fruitful and rewarding day we all had!

March 5-7, 2010 - During the first weekend of last month, I met with the first cohort which comprises the yearlong retreat being launched this year (Journeying with Henri Nouwen). Sixteen people officially participated (out of the more than 30 applicants). Needless to say, I'm so excited about this new community who will journey together via four weekend retreats throughout the year. For those of you who weren't able to take advantage of this opportunity this year, we are already preparing for 2011 and will soon start receiving applications. The theme for 2011 will be "The Journey of Imperfection." I invite you to consider being part of this next cycle if you are an avid reader of Nouwen.

I just got back from a very fruitful trip to Manila, Philippines a little more than a week ago. It's been a while since I last visited there so you can almost imagine the excitement I had to reconnect with old friends back home. Two days after I arrived (Feb. 12-14), I facilitated a weekend retreat for some 40 plus people at Karis Tagaytay (about 2 hours away from Manila). The diverse participants represented various groups and denominations who were so eager to learn more about Nouwen. The whole weekend was a treat - just to be around fellow learners (not to mention the delight of feasting on lots of Filipino food during meal times!).

The following Saturday (Feb. 20), I had the privilege of doing a one-day ecumenical seminar at the Union Church of Manila for close to 200 people. It was a very interactive time and the general response of the participants was encouragingly positive. I met some really nice folks during the book signing immediately following the seminar. Again, what a diverse composition of attendees we had! I was heartened by the fact that a lot of them have been so impacted by the works of Henri Nouwen (I'm glad a number of his books are already being printed locally!).